What is the connection between cancer, opium trade and Afro-American history
in the United States?

Painkillers that fall under the definition of Opioids [1], also referred to as “narcotics”, are medical derivatives of opium, produced from the poppy plant. Among them you may find morphine, codeine, percocet, oxycodone, oxycontin, fentanyl, as well as the drug known as heroin. These painkillers are very potent anesthetics and are also used to anesthetize the body during surgeries. The opioids can pass by the blood-brain barrier [2] and effect directly the nerve system, this is what makes them so successful in neutralizing pain.

Other than their positive and useful usage in relieving pain, opioids have less pleasant and even dangerous side effects, which are not always discussed with the patient: These drugs also suppress appetite and bowel movement, and produce the sensation of euphoria, especially when starting using them. Just like heroine, which is defined as a dangerous drug, opioids are addictive from the first time consumed and the withdrawal symptoms are very hard. In fact, if we look at people addicted to opioids, we would find they are not too different from people addicted to heroin: The don’t need anything and want nothing, they aren’t hungry, they sleep a lot and only wake up to take another pill, they experience an unsatisfactory sleep which does not provide real rest. Their eyes are glassy and they stare with no focus, they may look us in the eyes but their look is distant and estranged. When spoken to, they might be offensive or simply make no sense, occasionally says things that heart our feelings and not remember.

When looking at people who are addicted to heroin, it seems like they can be perfectly “happy” while living on the street, with no food or shelter, sometimes without even cloths. This is because this substance anesthetizes any will or connection with reality. The lack of will and carelessness are so powerful, a sensation that a person who has never used this drug will never be able to understand.  When they say a heroin addict would “sell his own family just to get more of that drug” it is not that far from the truth. However, this does not happen because this person is a bad person, or because he wants to harm his close ones. In fact, this person has lost any sense of will whatsoever, other than the will to go back to that sweet euphoric sensation he felt when first using the drug [3].

Another problem with painkillers of this group, such as oxycodone or morphine, is that their pain-relieving effect works only in the initial period of time using them. After the body has gotten used to them, they are no longer effective in relieving the pain, the patient asks for higher dosages each time, but it is not really helpful. They tier the body, oppress appetite and cause chronic constipation, cause nausea and vomiting, however, the pain is still there.

Eventually, the usage of opioid painkillers leads to a disaster [4]: This substance is attached to the macrophages receptors [5], which play a key role in protecting the body from germs and cancer cells, as well as in healing and closing wounds. Unlike chemotherapy, narcotic medications do not kill white blood cells, so the problem cannot be detected on a simple blood work. However, those substances block the macrophages receptors, and shot down their activity of detecting eliminating infections. “Lacking an active immune system leads the body into a colossal damage”, says Dr. Eyal Attias [6], a general surgery specialist, a heart & chest surgeon experienced in treating complicated medical conditions. “If you ever had met a drug addict living in the street, you probably remember seeing at least one large open wound on their body. The wound does not seem to be closing, and the person does not seem to care about it. The combination between the addict’s indifference to his situation, along with the inability of the immune system to heal the wound is disastrous, and just like drug addicts, many cancer patients die from infectious diseases”, says the doctor. “This is why treating a person with an infectious or metastatic disease with narcotic painkillers actually encourages a collapsing process in the body. You may say that the sad and painful dying process of cancer patients is a pre-programmed euthanasia”.

Although the aforementioned information is known to every beginner doctor, receipts for narcotic painkillers are the most common ones given to cancer patients to help deal with chronic pain, as the pain is unbearable and there is no other substance that can help prevent it. Is there?

Medicinal cannabis, which is still considered to be a dangerous and illegal drug in most states and countries (up till the writing of this article) has been proven above any doubt to be effective in treating chronic pain in cancer patients as well as other diseases. Unlike morphine, medicinal cannabis encourages appetite and a healthy bowel movement, and patients report “less severe side effects, less withdrawal potential, ease of access, and better symptom management for their conditions” [7].

If that is so, why does the healthcare system still insist on avoiding medicinal cannabis and prefer giving to the patients drugs with a much harder and more variable side effects? 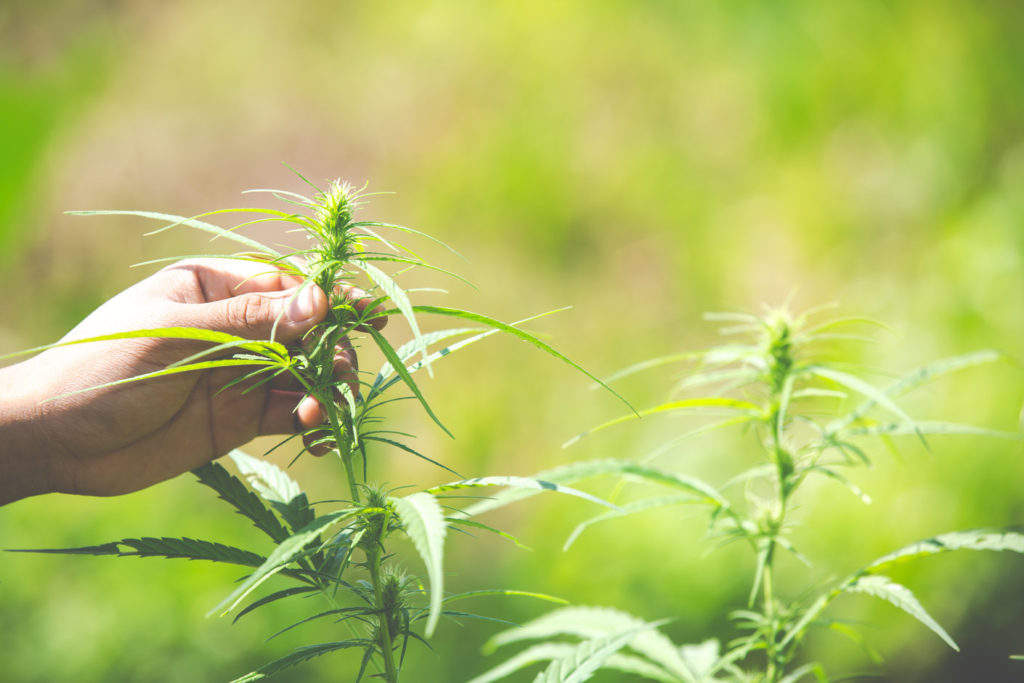 To answer that question, we would have to go back to the time in between the two world wars, where we can learn about the interests behind the anti-cannabis laws.

In the early twenties of the past century, right after world war 2, alcohol has been banned in the US in order to shift the control in using and selling alcohol exclusively to the pharmaceutical industry. Doctors were able to prescribe medicinal alcohol for their patients, and after only six months of alcohol prohibition, over 15,000 doctors and 57,000 pharmacists got their license to prescribe “medicinal brandy” or “medicinal cognac” [8]. Because of the high demand in alcohol, mafias operating in the United States started to smuggle alcohol into the country and sell it in the black market[9].

This episode in the US history was ended in the year of 1933, in which new laws were passed regarding the consumption and sale of alcohol.

Why was alcohol brought back to the public’s relatively free use and consumption?

In the period of between the two world wars the opium trade has been developed greatly, and the euphoria generating plant was sold in large quantities in the United States as well as other western countries. The mob, that was earlier focusing on smuggling and selling alcohol, has discovered that people get addicted to opium much faster, they consume it in larger quantities and are willing to pay more every time. The ration gram to dollar was mush better than the one of alcohol, which made the opium trade the ultimate business. Other than that, it was much easer to trade with powder than with liquid, which is heavier and more difficult to transport. The mob has shifted from trading alcohol into trading opium, from which heroine and other addictive drugs are produced. The pharmaceutical industry has started trading opium as well, in a legal way of course, developing anesthetic drugs for medicinal use.

The citizens in the large cities were getting addicted to the new substance, but the case was not the same in the rural arears. Most people in these arears worked in big farms which grew cotton and cannabis, that was widely used to produce strong fabrics (jeans) and massive ropes for cargo ships. Those farms belonged to Afro-Americans, who half a century earlier were forced to work at these farms as slaves, till slavery abolishment on 1865 [10]. In many arears, the former slaves got the right to own the farms in which they have been enslaved. The opium traders and pharma promoters going through these arears to sell their merchandise have noticed that the locals are chewing on cannabis (the famous image from western movies of cowboys chewing on tabaco leaves), and stay away from opium. The war on cannabis has started, and the American army got an explicit order to burn down all the farms [11]. From that moment on, cannabis made ropes were no longer available and were replaced by synthetic ropes, which were weaker and less effective [12].

Millions of farmers have found themselves unemployed. This has created a huge crisis in those communities, that had to move to the big cities seeking for a job. Eventually, because of the high supply in working men most of them found themselves in the streets and became drug addicts and traders out of despair. The Afro-American community in the United States has not recovered from this crisis till this very day, in addition to the horrible history of slavery that brought them to this continent in the first place.
At the end of WW2 cannabis ropes came back into use in cargo ships, as the synthetic ropes were not strong enough and failed to provide the needed demand during the war. However, the new farms were burned down at the end of the war.

Cannabis, just like other nature’s great healing substances, is banned for use in most countries till this very day.

A special Thank You to Dr. Dr. Eyal Attias, who has guided me and helped in writing this article.

The Northern Baja Gerson Center is a first rate health care facility that feels more like a resort. The staff is caring, friendly and knowledgeable, the food is amazing and is literally handcrafted by artist chef Laura Otis. What that women does with veggies is outstanding! The medical staff made me feel hopeful and inspired thru the Gerson therapy and advanced protocols. After 3 breast cancer diagnosis, this is what I have been looking for – a place to heal and learn a new of living. Thanks Dr Vickers and the entire staff at NBGC for taking such good care of me!! Have a great day!!
Suzanne MUSA
Hi Dr. Vickers, Geno and I would like to Thank you for all the services you provided at Baja. I had a great stay, and the staff was great. Thank you for all the knowledge you and your staff has offered me. Great job Dr Vickers, Thank you!
Mary GUSA
I am doing well and fully back into my busy life after I left the Stella Maris Clinic in February. I spent a lot of my recovery truly resting and eating well. All of those weeks and months were in an environment of little or no stress, which I am sure, made a big difference. I hope all is well for everyone there. I’m sending you all my very best wishes and blessings.
John DoeCEO
Previous
Next
Read All Testemonials